Brookhaven, PA is a borough in Delaware County, PA. The population is estimated at 8,006. Brookhaven, PA was originally part of a land grant given to William Penn in 1681 by King Charles II of England. Limo Service in Brookhaven, Pa 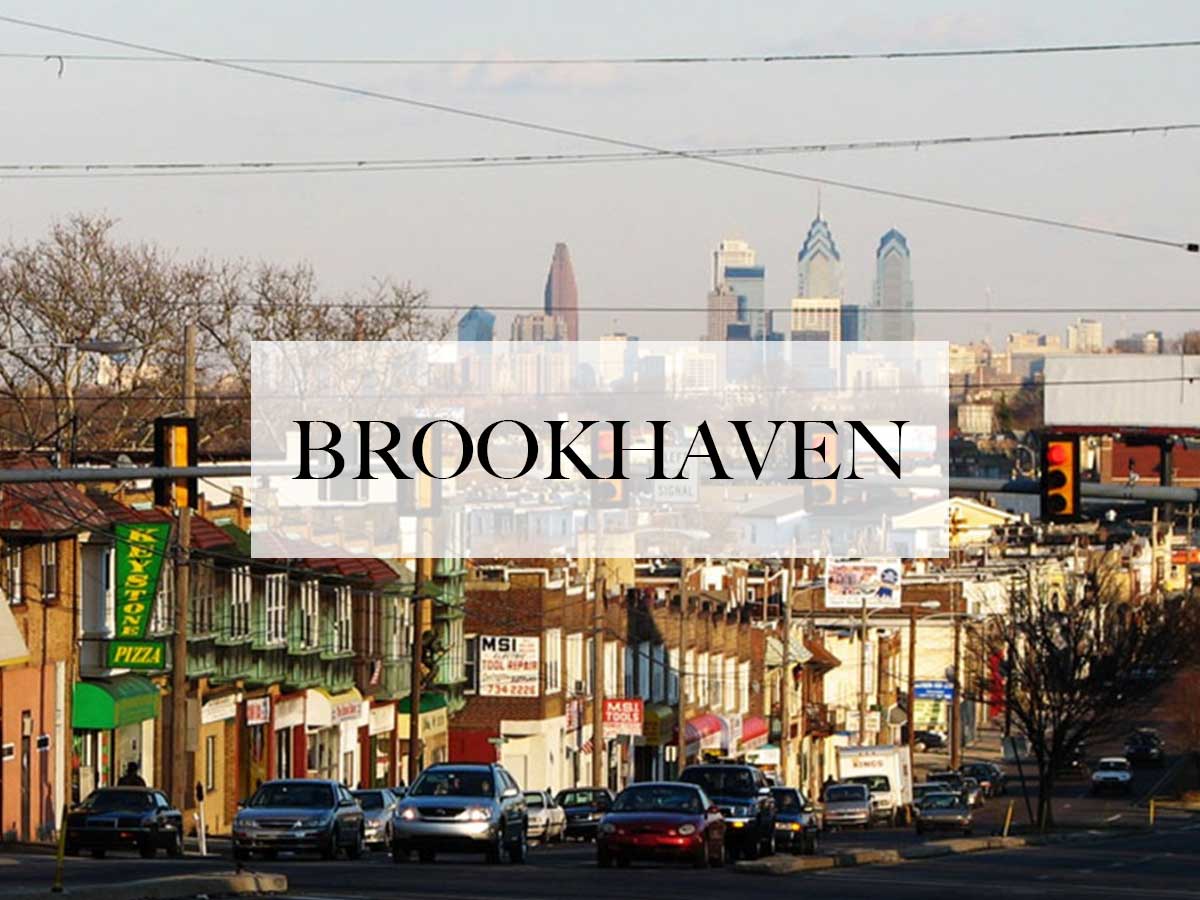 Like the other 300 plus communities that Kevin Smith Transportation Group services, Brookhaven, PA appreciates the engagement that only a local company can deliver, With operations based across southeastern PA including Berks, Bucks, Brookhaven, Delaware and Montgomery Counties and the entire Philadelphia, PA area, KSTG is the obvious choice for every person and business in Brookhaven, PA.

For individuals and companies based in Brookhaven, PA who have a need for either Leisure or Corporate Transportation services, Kevin Smith Transportation Group is the only solution you need. KSTG’s Leisure division will often be seen sending out a Wedding Limo or Call on most weekends. Wedding Shuttles can be seen every weekend in Brookhaven, PA, moving everybody from Bridal Parties to Wedding Guests, making sure everybody can celebrate safely without the worry of figuring out how they will get back to the hotel safely. If a Party Bus rental is on your list, let KSTG arrange the perfect vehicle. Looking for something more elegant like a Stretch Limo and have KSTG send one of our Luxury Limos to Brookhaven, PA and pick you up. Ideas may arrange for that landmark birthday celebration to simply a bar crawl with a group of life-long friends. Whatever the need, if your night is starting or ending in Brookhaven, PA, let Kevin Smith Transportation Group deliver you in style.

Almost every business in Brookhaven, PA will eventually have a need for professional Corporate Transportation services. It may be a one-time request for that VIP client to daily shuttle services moving employees back and forth from a regional rail station. Whatever the need, Kevin Smith Transportation Group’s fleet of Black Vehicles from Yukons to Cadillac’s are the perfect choice for those focused on Luxury and Quality. Airport Transportation is a common service request with Philadelphia International Airport (PHL) located so close to Brookhaven, PA. With more than a dozen International Airports in the Mid-Atlantic area, many companies will utilize KSTG’s services for Airport Transportation to places like Newark international (EWR), Kennedy Airport (JFK) and other airports north and south of the Brookhaven, PA area.

Other that Kevin Smith Transportation Group offers companies in Brookhaven, PA include Shuttle Services. What makes companies great in Brookhaven, PA is their ability to recruit the best talent. That often means recruiting in non-traditional markets. With KSTG’s Shuttle Services, many companies today have expanded their target markets to locations up and down SEPTA’s regional rail lines, providing employees with an easier commute. After a long day at work, getting a chance to relax in the back of a KSTG shuttle and being dropped off at the rail station for a traffic-free commute home is setting apart those companies in Brookhaven, PA who are leveraging this employee perk. In addition, many companies in Brookhaven, PA have employees or clients who will be traveling from outside the region. Whether it is Philadelphia International Airport or a local FBO like Wings Field, Northeast Regional Airport or Doylestown Airport, KSTG has a fleet of Luxury Cadillac XTS’s and Black Yukon’s to make sure your visitors are delivered on time and safely.

Most companies in Brookhaven, PA have begun to institute strict Duty of Care requirements around ground transportation, not allowing their employees to use any unregulated apps. This means that a company like Kevin Smith Transportation Group, with a highly skilled, licensed and screened staff of chauffeurs, becomes the perfect option for any company in Brookhaven, PA who wants to offer their employees a safe and reliable transportation option. Black Car service is more than just a late model black vehicle. It is about providing a custom chauffeured experience where safety and luxury don’t have to be sacrificed.

Brookhaven, PA has been a key contributor to the success of Kevin Smith Transportation Group. An award winning company since its inception, KSTG delivers daily to both individuals and companies across Brookhaven, PA. So whether it is that once in a lifetime event that needs to be perfect or just a routine trip to the airport, let KSTG be your total ground transportation solution. Today, KSTG is Brookhaven, PA’s #1 Transportation Company and as we continue to grow, the entire team at KSTG is excited to see where that success will take us. So for those who use us regularly or just once a year, thank you for making KSTG the company it is today.

Brookhaven, PA is a borough in Delaware County, PA. The population is estimated at 8,006.  Brookhaven, PA was originally part of a land grant given to William Penn in 1681 by King Charles II of England. The Proprietor negotiated with the Lenni-Lenape Indians, who were the original occupants of the land, the land was then divided into municipal districts. The area of Brookhaven was included in the Municipal District of Chester Township. 317 acres were surveyed to Thomas Coebourn who settled in 1682 along with Richard Few who was granted 227 acres.

Thomas Brassey was granted 385 acres in 1684. These original grants were parceled eventually into smaller pieces of land and sold to subsequent settlers, such as Trimble, Edwards, Lister and Shepherd, among others. Many of these original settlers have streets named after them in the borough. The elementary school is named Coebourn Elementary (on Coebourn Blvd) after Thomas Coebourn and there are streets named Trimble, Edwards, Lister and Shepherd.

For approximately two hundred and fifty years, the region was dependent upon a farming and dairy economy as well as two thriving mill businesses spanning both Chester Creek and Ridley Creek. Bisected by the 1687 Edgmont Great Road, Brookhaven developed into a town of small crossroads, at Sneath’s Corners in the mid-19th century. The road from Hinkson’s Corners (now Brookhaven Road), was established sometime before 1816 as a service road to the mills on Ridley and to Chester Creeks in 1847. These byways became major highways and at the crossroads of these two highways grew a cluster of services, professional offices and summer homes. In 1872, the name “Brookhaven” became most widely used after it was published in the letterhead of the Beatty Brothers General Store at Sneath’s (later Beatty’s) Corners.

The Brookhaven community attracted numerous doctors and lawyers, and at the start of the 20th century, was a popular locale for Sunday outings amongst residents of the river tier communities.

Brookhaven’s mills were perhaps its most notable commercial activity. Thomas Coebourn established the second gristmill in the new Pennsylvania colony, successfully challenging William Penn’s monopoly vested in the Caleb Pusey Mill (the Caleb Pusey house is still standing) downstream on Chester Creek. After a 1687 court battle went in Coebourne’s favor and granted individuals the right to establish mills, the area’s creeks powered a multitude of industries.

The original Coebourne Log Mill was replaced in 1750 by a stone structure which was sold to Jonathan Dutton (Dutton Mill Road is a major road in the area) in 1792. A redrawing of Chester Township’s borders in 1829 placed this site in present Middletown Township, with only the mill race and the owner’s mansion in Brookhaven. The Johnson Ax Factory, the Lower Bank (Todmorden-Sackville) Hair Cloth Mills, Bickley’s Gristmill and the Crozer Cloth Mill all utilized the notable drop for streams from the inland plateau to power their machinery. Both the 1826 and the post-flood 1844 mill surveys show large outputs for these factories.

In the latter part of the 19th century, several large stock farms were thriving; by the 1900s most of these were consolidated under the ownership of John P. Crozer (the namesake of Crozer-Chester Medical Center in Upland) who bred racehorses and prize bulls. After Crozer’s death and World War II, these farms were sold off to developers.

In 1902, the New Chester Water Company built a filtration and storage facility which then serviced the entire city and Chester Township. This plant, on Harrison’s Hill, opposite K-Mart, (K-Mart is now closed) is still in active use. The Delaware Valley’s rapid industrial expansion and the resulting baby boom of World War II, brought increasing pressure for suburban housing.

At the time of Brookhaven Borough’s incorporation on April 4, 1945, the Borough had 672 persons and 150 homes. The trolley line which had run from Chester to Media via Edgmont Avenue stopped in 1938. The trolley tracks were removed in 1945 and the road was realigned and widened as most of the area’s transportation had become automotive. In the last fifty years, Brookhaven has evolved very dramatically from a dairy and stock farm economy to a residential community of over 8,500 people living in over 3,600 homes, apartments and condominiums and supporting approximately 150 businesses.

A famous haunt of Brookhaven is Tom Jones Restaurant, which was sued by Tom Jones (the singer) for taking his name. The lawsuit was later dropped, and Tom Jones is still there to this day.

One of the first Walgreens in the Philadelphia area opened in Brookhaven in 1994. It was built on the site of an old Ponderosa Steakhouse. Brookhaven also was home to one of the first Shell stations in Delaware County, which converted from Texaco in 2004 (originally opened in 1981).