Clifton Heights, PA is a borough in Delaware County, PA, located on Darby Creek 8 miles west of downtown Philadelphia. The population is estimated at 6,652. Limo Service in Clifton Heights, Pa 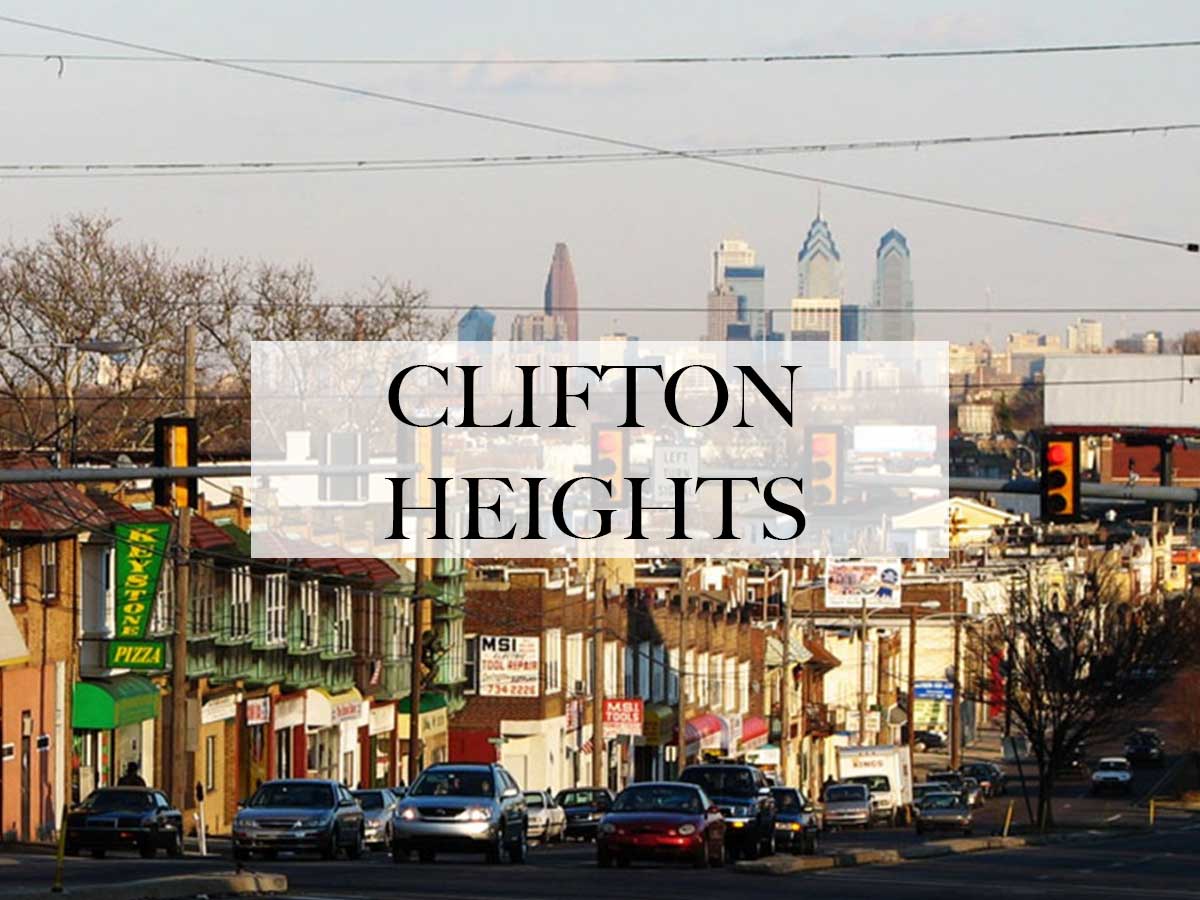 Like the other 300 plus communities that Kevin Smith Transportation Group services, Clifton Heights, PA appreciates the engagement that only a local company can deliver, With operations based across southeastern PA including Berks, Bucks, Clifton Heights, Delaware and Montgomery Counties and the entire Philadelphia, PA area, KSTG is the obvious choice for every person and business in Clifton Heights, PA.

For individuals and companies based in Clifton Heights, PA who have a need for either Leisure or Corporate Transportation services, Kevin Smith Transportation Group is the only solution you need. KSTG’s Leisure division will often be seen sending out a Wedding Limo or Call on most weekends. Wedding Shuttles can be seen every weekend in Clifton Heights, PA, moving everybody from Bridal Parties to Wedding Guests, making sure everybody can celebrate safely without the worry of figuring out how they will get back to the hotel safely. If a Party Bus rental is on your list, let KSTG arrange the perfect vehicle. Looking for something more elegant like a Stretch Limo and have KSTG send one of our Luxury Limos to Clifton Heights, PA and pick you up. Ideas may arrange for that landmark birthday celebration to simply a bar crawl with a group of life-long friends. Whatever the need, if your night is starting or ending in Clifton Heights, PA, let Kevin Smith Transportation Group deliver you in style.

Almost every business in Clifton Heights, PA will eventually have a need for professional Corporate Transportation services. It may be a one-time request for that VIP client to daily shuttle services moving employees back and forth from a regional rail station. Whatever the need, Kevin Smith Transportation Group’s fleet of Black Vehicles from Yukons to Cadillac’s are the perfect choice for those focused on Luxury and Quality. Airport Transportation is a common service request with Philadelphia International Airport (PHL) located so close to Clifton Heights, PA. With more than a dozen International Airports in the Mid-Atlantic area, many companies will utilize KSTG’s services for Airport Transportation to places like Newark international (EWR), Kennedy Airport (JFK) and other airports north and south of the Clifton Heights, PA area.

Other that Kevin Smith Transportation Group offers companies in Clifton Heights, PA include Shuttle Services. What makes companies great in Clifton Heights, PA is their ability to recruit the best talent. That often means recruiting in non-traditional markets. With KSTG’s Shuttle Services, many companies today have expanded their target markets to locations up and down SEPTA’s regional rail lines, providing employees with an easier commute. After a long day at work, getting a chance to relax in the back of a KSTG shuttle and being dropped off at the rail station for a traffic-free commute home is setting apart those companies in Clifton Heights, PA who are leveraging this employee perk. In addition, many companies in Clifton Heights, PA have employees or clients who will be traveling from outside the region. Whether it is Philadelphia International Airport or a local FBO like Wings Field, Northeast Regional Airport or Doylestown Airport, KSTG has a fleet of Luxury Cadillac XTS’s and Black Yukon’s to make sure your visitors are delivered on time and safely.

Most companies in Clifton Heights, PA have begun to institute strict Duty of Care requirements around ground transportation, not allowing their employees to use any unregulated apps. This means that a company like Kevin Smith Transportation Group, with a highly skilled, licensed and screened staff of chauffeurs, becomes the perfect option for any company in Clifton Heights, PA who wants to offer their employees a safe and reliable transportation option. Black Car service is more than just a late model black vehicle. It is about providing a custom chauffeured experience where safety and luxury don’t have to be sacrificed.

Clifton Heights, PA has been a key contributor to the success of Kevin Smith Transportation Group. An award winning company since its inception, KSTG delivers daily to both individuals and companies across Clifton Heights, PA. So whether it is that once in a lifetime event that needs to be perfect or just a routine trip to the airport, let KSTG be your total ground transportation solution. Today, KSTG is Clifton Heights, PA’s #1 Transportation Company and as we continue to grow, the entire team at KSTG is excited to see where that success will take us. So for those who use us regularly or just once a year, thank you for making KSTG the company it is today.

Clifton Heights, PA is a borough in Delaware County, PA, located on Darby Creek 8 miles west of downtown Philadelphia. The population is estimated at 6,652.  The Lower Swedish Cabin was listed on the National Register of Historic Places in 1980.

Lower Swedish Cabin is an historic Swedish-style log cabin on Creek Road in Drexel Hill, Pennsylvania along Darby Creek. The cabin may be one of the oldest log cabins in the United States.  It was likely built sometime between 1640 and 1650 by Swedish immigrants who were part of the New Sweden colony.   Although claims have been made that in the early 1900s, film pioneer Siegmund Lubin filmed several movies at the site, recent scholarship does not support this assertion.  The house served as a private residence until 1937, when it was recorded by the Historic American Buildings Survey and the Cabin became the property of the township of Upper Darby.  After neglect and vandalism throughout the mid-1900s the house was restored in 1987.

Cinderella was an American rock band from the suburbs of Philadelphia, Pennsylvania. The band emerged in the mid-1980s with a series of multi-platinum albums and hit singles whose music videos received heavy MTV rotation. Cinderella initially had a heavy metal sound before shifting to a more hard rock/blues rock sound. By the mid-1990s, the band’s popularity declined severely due to personal setbacks, break-ups, and changes in the music industry. After a hiatus, Cinderella reunited in 1997 and continued to perform live within the next 20 years but never released any studio material after their 1994 album Still Climbing. The band has sold 15 million records worldwide, according to Tom Keifer’s official website. By 2017, Cinderella had become inactive once more, with its members performing in other projects, and in November of that year, Keifer declared that “there won’t be any reunion.”

Cinderella was formed in 1983 in Philadelphia suburb, Clifton Heights, Pennsylvania by singer-songwriter, keyboardist, and guitarist Tom Keifer and bassist Eric Brittingham.  The initial lineup also included guitarist Michael Smerick and drummer Tony Destra. In 1985, Smerick and Destra left to form Britny Fox, another Philadelphia-based glam metal band. Cinderella practiced in the attic of the American Legion building in Wayne, PA.  In a 2014 interview, Tom Keifer stated that Kiss bass guitarist Gene Simmons first took interest in the band, and tried to get them a deal with Polygram, but they were not interested. Jon Bon Jovi saw them perform at the Empire Rock Club in Philadelphia and talked to his A&R man, Derek Shulman about seeing the group. Shulman was not convinced at first either and wanted to sign the band to a six-month development deal. But after extensive negotiations, he finally signed the band.  In 1985, with a recording contract with Mercury/Polygram Records in the works, guitarist Jeff LaBar and drummer Jim Drnec joined the band.