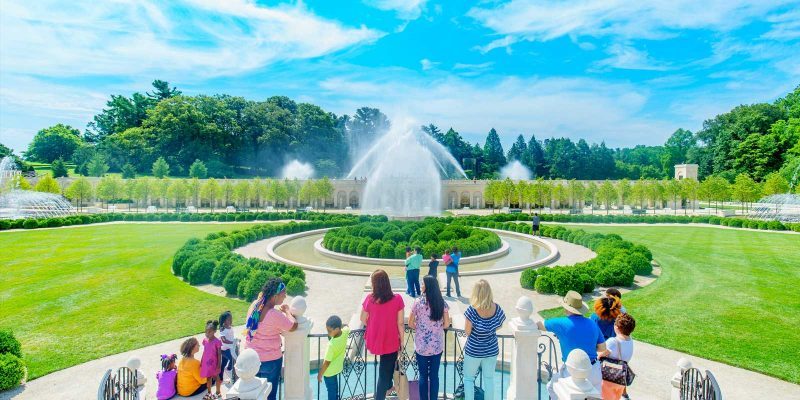 Longwood Gardens hosts 6 amazing nights of their Fireworks and Fountains Shows.  Each event is a unique and stirring mixture of music and fireworks, all while enjoying the beauty that only is the Longwood Gardens.

Longwood Gardens offers a variety of ticket options and we encourage you to visit their website at www.longwoodgardens.org to learn more this unique series of events and all of the events that Longwood Gardens hosts throughout the year.

Want to talk to a Fireworks and Fountains Show expert who can help you arrange the perfect Limo, Party Bus or SUV? Call 610-222-6225 and ask to speak to somebody who specializes in all things Longwood Gardens and they will customize your transportation for this special event.

Celebrate summer’s arrival with iconic anthems of the season from The Beach Boys, The Go-Gos, Justin Timberlake, and more. This upbeat show will get you in a feel-good, summer state of mind.  Consider a Kevin Smith Transportation Group Stretch Limousine for your dedicated transportation solution.

Join us for this stirring salute to America featuring hits from Tom Petty, Whitney Houston, Bruce Springsteen, and more musical legends.  Looking to take the entire family?  A Kevin Smith Transportation Group Luxury SUV is the perfect vehicle to travel stress-free while enjoying the festivities.

Find yourself transported to the artist’s graceful Giverny landscape amid sounds of the classics from Debussy, Dukas, Ravel, and other celebrated French composers.  A Kevin Smith Transportation Group Party Bus is the perfect choice to keep the partying going all night long.

Celebrate musical mastermind Bernstein’s 100th birthday with selections from some of his most famous works including West Side Story, On the Town, Candide, and other quintessential compositions.

Themes from your favorite animated movie classics—including Aladdin, The Lion King, The Little Mermaid, and more—delight the young, and young at heart, during this magical performance.

Take a bell-bottomed step back in time to the disco decade featuring iconic music from The Bee Gees, Kool and the Gang, Donna Summer, and more cool cats you’ll really dig.

Longwood Gardens is an American botanical garden. It consists of over 1,077 acres of gardens, woodlands, and meadows in Kennett Square, Pennsylvania, United States in the Brandywine Creek Valley.  It is one of the premier horticultural display gardens in the United States and is open to visitors year-round to enjoy exotic plants and horticulture (both indoor and outdoor), events and performances, seasonal and themed attractions, as well as educational lectures, courses, and workshops.

Longwood Gardens has a long and varied history. For thousands of years, the native Lenni Lenape tribe fished its streams, hunted its forests, and planted its fields. Evidence of the tribe’s existence is found in quartz spear points that have been discovered on and around the property and can be found on display in the Peirce-du Pont House on the Longwood Gardens property.

In 1700, a Quaker farmer named George Peirce purchased 402 acres of this English-claimed land from William Penn’s commissioners. George’s son Joshua cleared and farmed the land and in 1730 he built the brick farmhouse that, enlarged, still stands today.  In 1798, Joshua’s twin grandsons Samuel and Joshua, who had inherited the farm, actively pursued an interest in natural history and began planting an arboretum that eventually covered 15 acres. The collection included specimens that they collected from the wild as well as plants acquired from some of the region’s leading botanists.

Want to talk to a Fireworks and Fountains Show expert who can help you arrange the perfect Limo, Party Bus or SUV? Call 610-222-6225 and ask to speak to somebody who specializes in all things Longwood Gardens and they will customize your transportation for this special event.

By 1850, the arboretum boasted one of the finest collections of trees in the nation and had become a place for the locals to gather outdoors – a new concept that was sweeping America at the time. Community picnics and socials were held at Peirce’s Park in the mid to late 19th century.

As the 19th century rolled into the 20th, the family’s heirs lost interest in the property and allowed the arboretum to deteriorate. The farm passed out of the family through several hands in quick succession, and a lumber mill operator was about to cut down the trees for timber in early 1906.  This threat moved Pierre S. du Pont, American entrepreneur, businessman, philanthropist, and member of the prominent du Pont family to take action. On July 20, 1906, 36-year-old du Pont purchased the farm primarily to preserve the trees. He wasn’t planning to create Longwood Gardens, but within a few years, his desire to make it a place where he could entertain his friends transformed a simple country farm into one of the country’s leading horticultural display gardens.

When Pierre du Pont died in 1954, he “had in place a well-funded yet adaptable mechanism for Longwood to continue.”

Today the 1,077- acre Longwood Gardens consists of varied outdoor gardens, ranging from formal to naturalistic in their landscape design, and 20 indoor gardens within a 4.5 acre group of heated greenhouses. Longwood’s Conservatory contains 4,600 different types of plants and trees, as well as fountains.  The Gardens also has extensive educational programs including a tuition-free two-year school of professional horticulture, a graduate program, and extensive internships.  It hosts hundreds of horticultural and performing arts events each year, from flower shows, gardening demonstrations, courses, and children’s programs to concerts, organ and carillon recitals, musical theatre, fountain shows, and fireworks displays. It also hosts an extensive Christmas light display during the holiday season.

The Gardens have attracted more than 1 million visitors a year since 2012.  Plans for growth and expansion for the next four decades began in 2010 with the hiring of West 8, a Dutch landscape architecture and urban planning firm with headquarters in Rotterdam and an office in New York City. The founder of West 8, Adriaan Geuze, stated their mission is: “to celebrate Longwood, enjoy it, keep it, preserve it, while asking how it could function as a spectacular place for larger groups of people in the 21st century.” The comprehensive Longwood plan is now complete and the first major project in the plan, the revitalization of the Main Fountain Garden, began in 2014.

To enjoy any event at Longwood Gardens, consider the services of Kevin Smith Transportation Group.  With a fleet of Limos, Party Buses, SUV’s and Luxury Sedans, you can take advantage of a chauffeured service while enjoying the events at Longwood Gardens.